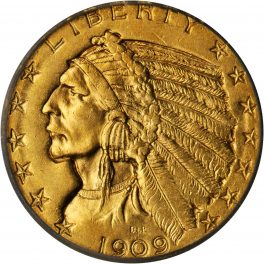 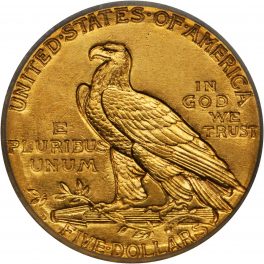 History, Information, and Value of 1909-O Indian Gold Half Eagle

While the typical 1909-O Indian Half Eagle exhibits bold to sharp detail overall, most have a softly impressed O mintmark that is sometimes only partially defined. On such pieces, the mintmark is also doubled to the left. A small number of survivors do not show doubling to the mintmark and the O is also sharply impressed and readily evident. Very few survivors retain complete mint luster, but on those that do a frosty finish is usually noted. Virtually all survivors are moderately to heavily abraded. This is a neat New Orleans Mint piece to own.

The 1909-O is the only New Orleans Mint issue in any of the four widely collected 20th century U.S. gold series. Examples enjoy strong collector demand at all levels of preservation, with most found in grades such as VF or EF. With the lowest mintage of the type and a below average rate of survival the 1909-O is scarce even in worn condition. In terms of total number of Mint State coins extant this is the leading rarity in the Indian half eagle series. Fewer than 100 Uncirculated coins are known, most of which are in the MS-60 to MS-62 grade range. Choice examples in MS-63 and MS-64 are few and far between, while in Gem Mint State the 1909-O is all but unobtainable. One of the finest known examples was part of the famed Louis E. Eliasberg, Sr. Collection sold by Bowers and Ruddy Galleries in October 1982 under the title of The United States Gold Coin Collection. That coin has since been certified MS-66 by PCGS.