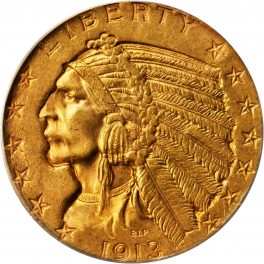 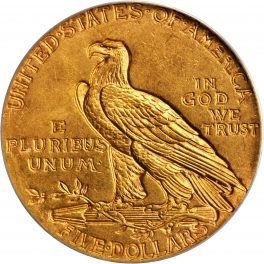 History, Information, and Value of 1913-S Indian Gold Half Eagle

Nearly as difficult to locate with superior technical quality and eye appeal as the 1912-S, the 1913-S Indian Half Eagle is also characterized by poor striking quality, inferior luster, and abraded surfaces. Evidence of die deterioration is often seen at the borders on one or both sides, and the S mintmark is usually ill defined with little central detail.

The 1913 San Francisco Mint coin is among the scarcer Indian half eagles in circulated grades, and it is rare in Mint State. Most Uncirculated survivors are found in MS-60 to MS-62 and have limited eye appeal. Choice examples in MS-63 and MS-64 are elusive with Gems all but unknown. One of the finest 1913-S half eagles extant is the PCGS MS-66 that appeared in several auctions during the late 20th and early 21st centuries, including Bowers and Merena’s Rarities Sale of January 1999.