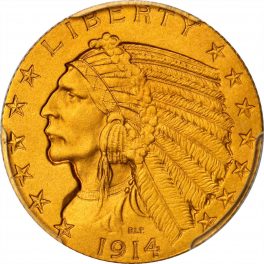 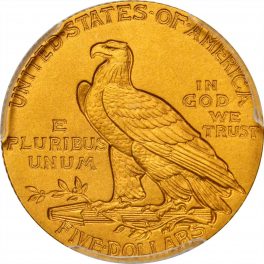 History, Information, and Value of 1914 Indian Gold Half Eagle

The typical Mint State 1914 Indian Half Eagle is sharply struck, although the softly frosted luster is usually somewhat subdued with a granular texture. Most survivors are lightly to moderately abraded.

Scarcer than the other Philadelphia Mint half eagles of the 1909 to 1915 era, the 1914 is still readily obtainable by the standards of this series. Circulated coins are plentiful and, although moderately scarce, Mint State examples in the MS-60 to MS-64 range exist in large enough numbers that acquiring one should not be difficult. The 1914 is genuinely rare in MS-65, however, and only a handful of coins have been certified finer by PCGS and NGC. The penultimate Proof issue in this series, the Sand Blast Proof 1914 is nearly as rare as the 1913 despite a slightly higher mintage. Only 60 to 75 coins are thought to have survived at all levels of preservation.