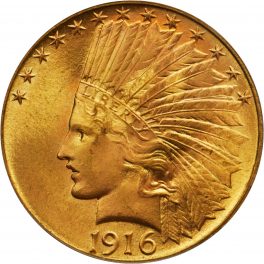 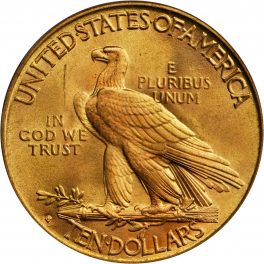 While most 1916-S Indian Gold Eagles are sharply struck, few possess outstanding luster. The finish is usually frosty, somewhat subdued, and with considerable granularity. The typical survivor is moderately to heavily abraded.
The 1916 San Francisco Mint coin is the only Indian eagle of this date and is the final issue struck for the type prior to 1920. Were it not for several small hoards repatriated from European banks in the 1970s, this issue would be rare in all grades. It remains scarce, however, even in worn condition. Uncirculated examples are even more elusive with most grading no finer than MS-63. Rare to very rare any finer, one of the two highest graded examples is the PCGS MS-67 from the fabulous Norweb Collection sold by Bowers and Merena in March 1988. The Norweb specimen was once owned by King Farouk of Egypt, whose collection was sold by Sotheby’s in 1954 as “The Palace Collection.”