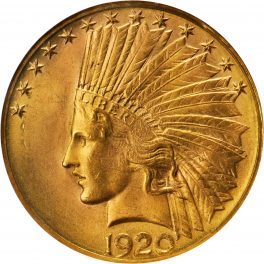 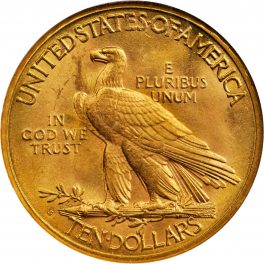 The 1920-S Indian Gold Eagle is one of the most challenging Indian eagles to locate with a bold strike. Most examples are softly defined in the centers, affecting the hair curls over Liberty’s ear and the letters RTY in LIBERTY on the obverse as well as the leading edge of the eagle’s left wing on the reverse. Additionally, the first three digits in the date are often soft with a somewhat “mushy” appearance. Luster is strong on this issue, however, and Mint State survivors are generally softly frosted or, less often, satiny. There is a fairly even split between noticeably abraded and relatively smooth coins.
The first eagle struck since 1916 and the only one of the 1917 to 1925 era, the 1920-S is a leading rarity in the 20th century U.S. gold coin series. Undoubtedly many examples remained undistributed until melted on government order in 1937. Others were exported, but with banks reeling from the economic downturn after the end of World War One, few were saved. In terms of total number of coins extant, circulated and Mint State, the 1920-S is the third rarest Indian eagle after the 1907 Rounded Rim and 1933. Considering only Mint State survivors the 1920-S is the prime rarity in this series. The majority of survivors are lightly circulated, typically AU, less often EF. Mint State coins are rare with most confined to the MS-62 to MS-64 grade range. The 1920 San Francisco Mint coin is exceedingly rare in Gem Mint State; the finest certified example is the remarkable MS-67+ graded by PCGS.