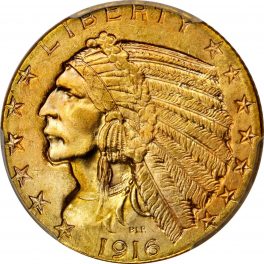 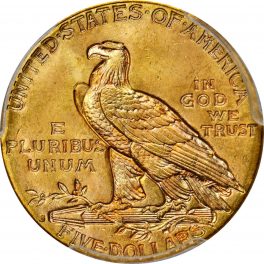 History, Information, and Value of 1916-S Indian Gold Half Eagle

This is a well struck half eagle issue and most examples are boldly to sharply defined throughout. The mintmark, while usually full, seldom displays complete detail in the center. Two distinct luster types are known for the 1916-S Indian Half Eagle. Most Mint State coins are a bit subdued in appearance with frosty surfaces and fine granularity to the texture. Rarer are the satiny pieces with superior luster quality.

The 1916-S is the final San Francisco Mint Indian half eagle, and the last issue of this type struck prior to 1929. It is scarcer than the 1915-S in circulated grades, yet more plentiful in Mint State due to a small hoard of approximately 200 coins that entered the market during the early 1980s. The 1916-S still numbers among the scarcer Indian half eagles in Mint State and, since most of the hoard coins are heavily abraded with inferior luster, it remains very scarce in MS-64 and rare any finer. Fewer than 30 Gems are known, including a few particularly noteworthy examples that have been certified MS-66 or MS-66+ by PCGS and NGC.