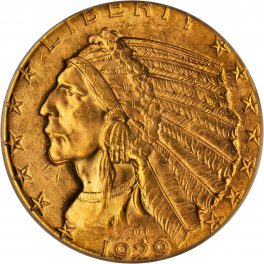 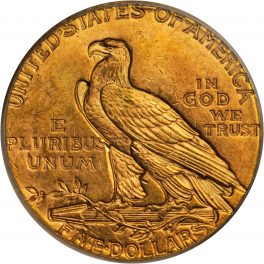 History, Information, and Value of 1929 Indian Gold Half Eagle

The typical 1929 Indian Half Eagle is overall sharply struck, yet with isolated softness of detail to the lowermost feathers in the Native American’s headdress. Evidence of die deterioration is often present here and there around the borders, especially on the obverse in the date area and on the reverse through the letters in STATES OF. The 1929 is highly lustrous with either a frosty or, less often, satin texture. The typical survivor is moderately to heavily abraded.

After a 13-year hiatus, production of half eagles resumed in 1929 with a mintage of 662,000 pieces from the Philadelphia Mint. This is the final issue in the Indian series, and also the final U.S. Mint half eagle produced for circulation. Most examples never found their way into commercial channels, however, and the 1929 is far rarer than the generous mintage might imply. In terms of total number of coins known, this is the rarest Indian half eagle. Most of the mintage remained in federal vaults until destroyed through melting during the late 1930s. Very few circulated coins are known, and most of the 350 to 400 coins extant are Mint State. Many of the finest examples were likely retrieved directly from the Philadelphia Mint or Treasury Department before the federal government stopped paying out gold coins at face value in April 1933. Most survivors are moderately to heavily abraded, however, suggesting that a small quantity of coins escaped the gold recall as part of foreign bank reserves. Elusive in all grades through MS-64, the 1929 is rare in Gem Mint State with some of the finest known examples certified MS-65 by PCGS and NGC. One of the PCGS MS-65s appeared in Bowers and Merena’s August 1999 sale of the Walter H. Childs Collection.