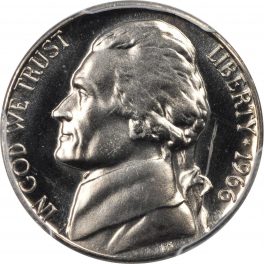 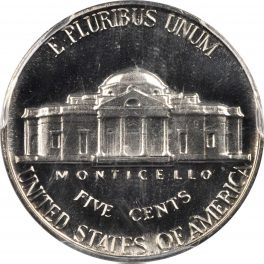 The 1966 Jefferson Nickels were struck at the Denver Mint with dies excluding mintmarks. The Philadelphia Mint struck coins early in the year. This year, the U.S. Mint was still producing the SMS sets. This year was also the first year that the designer, Felix Schlag’s, initials were added to the obverse of the coin.

The obverse text on the Jefferson Nickel reads “In God We Trust, Liberty” and the reverse text reads “E Pluribus Unum, Monticello, Five Cents, 5, United States of America.” The obverse of the coin has a bust of President Thomas Jefferson facing the left and the reverse depicts the full Monticello house built by Jefferson. Most Jefferson Nickel Five Cent pieces are worth face value. However, some of the coins have silver content or are less common. These coins may be worth slightly more. Any local coin dealer will try to buy these coins for face value, but our experts will make you an offer based on current auction values. If your coin is a better date coin or a rare coin, then rest assured that we will offer you top dollar! Please feel free to contact one of our experts to have them take a look at your rare coin and determine its worth. We are rare coin dealers!