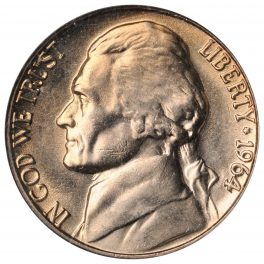 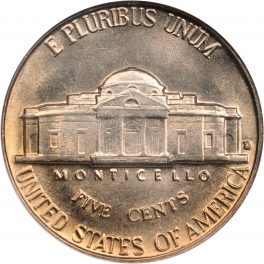 In 1938, the National Mint made an announcement that stated that there would be a National Competition for the new design of a five cent coin. The coins would be called Jefferson Nickels. The winner would receive $1,000 and would sign a contract with the Mint that any revisions could be made to the design. On April 24, 1938 Fleix Schlag was announced as the winner of the competition. The Mint announced that it would be several months before the nickel was to be released to the public. In September of 1938 the coin was finally released to the public.

Many of the earlier Jefferson Nickels has mixed dies, so look for alternate obverses and reverses for the first few years of production. There were also several popular double die varieties of this coin, so be sure not to miss those in your collection. The Nickels took a brief break during the war years to be composed of a small percentage of silver. After the war, production of the original, type 1, nickel continued.

Many of the older nickels tend to carry some value in high grades. The newer, modern nickels are often worth face value. If you have Jefferson Nickels that you would like us to take a look at, please contact an expert and we will give you more information.

Why Does My Graded Nickel Say “FS”?

The Jefferson Nickels have two distinct designations. The letters FS stand for Full Steps. This is the grading company’s way of showing that this coin has an exceptional strike. Sometimes, FS may be preceded by a 5 or 6, showing how many steps are visible.

Above, on the left, is a coin with a standard strike. This standard strike is good but weak around the steps area. This coin would not receive the FS designation because the horizontal lines that make up the steps do not extend across the entire staircase. It is important that the lines extend the entire length of the staircase without being impeded for the coin to receive the FS.

Above, on the right, is a coin with the Full Step designation. This coin shows five complete lines extending across the staircase. Since there is no break in the line, this coin is called “5FS.”