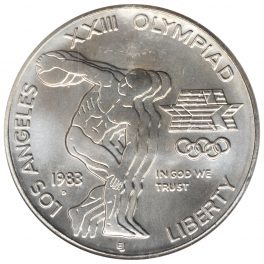 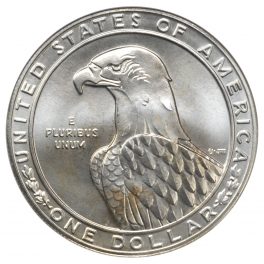 The 1983 $1 Silver Olympic Discus Thrower Commemorative Coin was produced in commemoration of the 1984 Olympics held in Los Angeles. This particular coin features a discus thrower on the obverse, and an eagle on the reverse. Because of the sheer number produced, these coins are relatively easy to find. It was produced in the Philadelphia Mint, the San Francisco Mint, and the Denver Mint. The coin was designed by Elizabeth Jones. This coin also featured a proof version. This coin would be a great addition to a Los Angeles commemorative set, which in all, would feature 4 coins of various denominations and metals.
Obverse: XXIII Olympiad – Liberty – Los Angeles – In God We Trust – 1983 | Reverse: United States of America – One Dollar – E Pluribus Unum