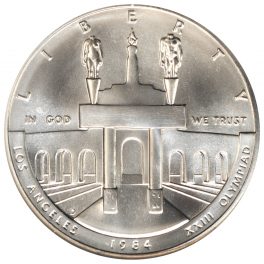 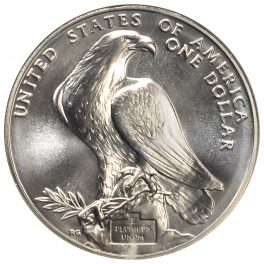 The 1984 $1 Silver Olympic Coliseum Commemorative Coin was made to commemorate the XXIII Olympics that were held in Los Angeles. The Obverse of the coin shows the Los Angeles Coliseum and the reverse features a bald eagle. The coin was designed by Robert Graham and has a Reeded edge. These coins are common and should be easy to track down. There are three different mint marks for this particular coin: Philadelphia, Denver, and San Francisco.
Obverse: Liberty – Los Angeles – 1984 – XXIII Olympiad – In God We Trust | Reverse: United States of America – E Pluribus Unum – One Dollar