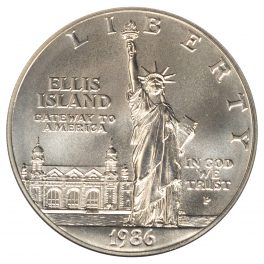 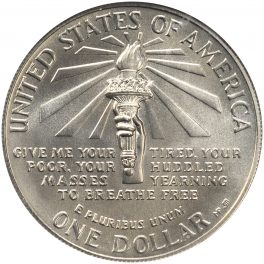 Information and History of $1 1986 Statue of Liberty Silver Coin

The 1986 $1 Silver Statue of Liberty/Ellis Island Commemorative Coin shows a well detailed image of the Statue of Liberty in the bay with Ellis Island situated behind it. On the reverse, there is a hand holding a torch with rays coming off of it. This coin was produced and designed by John Mercanti and Mathew Peloso. The Statue of Liberty is the first glimpse of America that many immigrants would see before heading to Ellis Island to officially enter the country. This coin marks the 200th anniversary of France presenting the United States with the Statue as a gift in celebration of the signing of the Declaration of Independence 110 years prior. This coin was minted at the Philadelphia Mint.
Obverse: Liberty – In God We Trust – 1986 – Ellis Island Gateway to America | Reverse: United States of America – One Dollar – Give Me Your Tired, Your Poor, Your Huddled Masses Yearning to Breathe Free – E Pluribus Unum