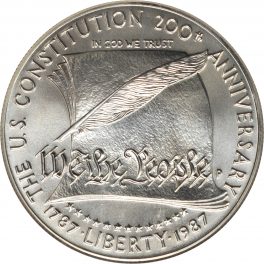 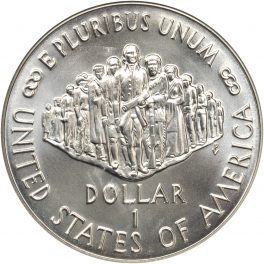 The United States Constitution was originally implemented in 1787, on September 17th. The 1987 $1 Silver United States Constitution Commemorative Coin was issued to celebrate the 200th anniversary of the signing. Designed by Patricia Verani, this coin shows a quill pen and paper on the obverse, and American citizens on the reverse. There was a gold coin minted to commemorate this event as well. This coin was minted at the Philadlephia Mint.
Obverse: The U.S. Constitution 200th Anniversary – 1787 – Liberty – 1987 – We The People – In God We Trust | Reverse: E Pluribus Unum – United States of America – 1 Dollar