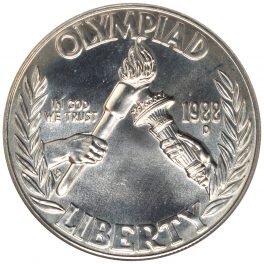 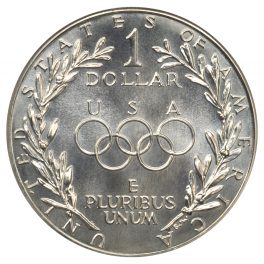 The 1988 Winter Olympics were held in Seoul, South Korea. However, the United States mint produced a 1988 $1 Silver Olympic Participation Commemorative Coin for the event. Designed by Patricia Verani, this coin shows the passing of the torch on the obverse. The previous Olympics had been held in the United States, so this coin symbolizes the passing of the torch onto the next city. This coin has a dark, creamy lusted and is typically well struck. This coin was minted at the Denver Mint.
Obverse: Olympiad – Liberty – In God We Trust – 1988 | Reverse: United States of America – 1 Dollar – USA – E Pluribus Unum