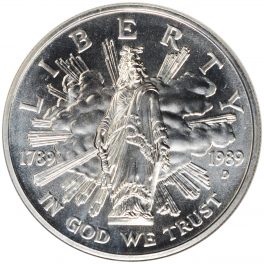 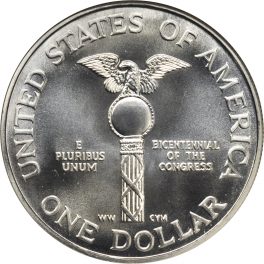 The 1989 $1 Silver Congress Commemorative Coin is a valuable coin to obtain. The die on 40 to 50 of these coins were rotated 180 degrees and will fetch a nice payday. Look for the coin that is graded as a MC70, as this coin is much more desirable that coins grades less. This coin, designed by William Woodard, represents the first meeting of the United States Congress 200 years ago in 1789. This coin was minted at the Denver Mint.
Obverse: Liberty – 1989 – In God We Trust – 1789 | Reverse: United States of America – One Dollar – Bicentennial of the Congress – E Pluribus Unum