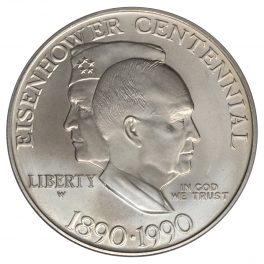 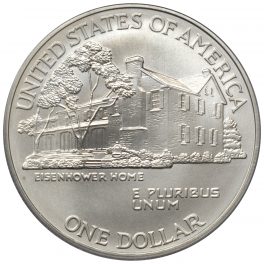 The 1990 $1 Silver Eisenhower Birth Centennial Commemorative Coin shows President Dwight D. Eisenhower in two phases of his life: in his younger years when he was a Five-Star General, and in his later years when he served as the President of the United States of America. This coin was designed by John Mercanti and Marcel Jovini. These coins are easy to find in both regular strike and proof strike. The original Mint sell price was $23 and $29, respectively. This coin was minted at the West Point Mint.
Obverse: Eisenhower Centennial – 1890-1990 – In God We Trust – Liberty | Reverse: United States of America – One Dollar – Eisenhower Home – E Pluribus Unum