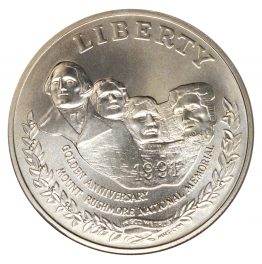 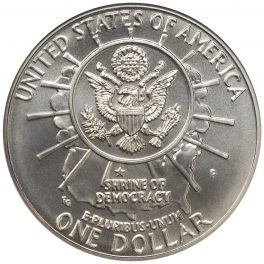 The 1991 $1 Silver Mount Rushmore Commemorative Coin celebrated the 50th Anniversary of the monument. The construction on Mount Rushmore ran from 1927 until 1941 and depicts 4 of the Presidents of the United States, as does the coin. This coin was minted at the Philadlephia Mint.
Obverse: Liberty – 1991 – Golden Anniversary Mount Rushmore National Memorial – In God We Trust | Reverse: United States of America – One Dollar – Shrine of Democracy – E Pluribus Unum