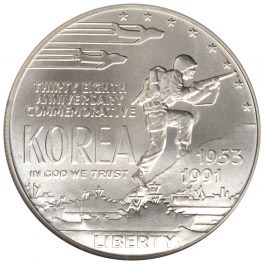 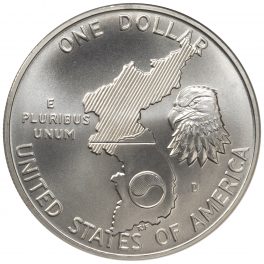 The 1991 $1 Silver Korean War Commemorative Coin was designed by John Mercanti and James Ferrell. This coin commemorates the 38th anniversary of the Korean War. The original pricing was $23 for a regular strike and $26 for a proof strike. This coin was minted at the Denver Mint.
Obverse: 1953 – 1991 – Liberty – Thirty Eight Anniversary Commemorative Korea – In God We Trust | Reverse: One Dollar – United States of America – E Pluribus Unum