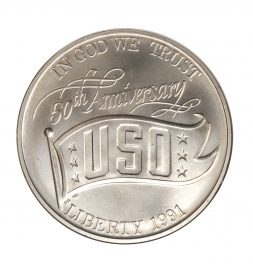 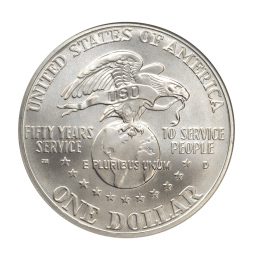 The 1991 $1 Silver USO Commemorative Coin was created for the 50th anniversary of the USO Organization. The obverse, designed by Robert Lamb and John Mercanti, features a USO banner and the reverse shows the banner being held by an eagle over the globe. This coin was originally sold in the $20 range for both regular strikes and for the proof strikes. This coin was minted at the Denver Mint.
Obverse: In God We Trust – Liberty 1991 – 50th Anniversary USO | Reverse: United States of America – One Dollar – Fifty Years Service to Service People – E Pluribus Unum