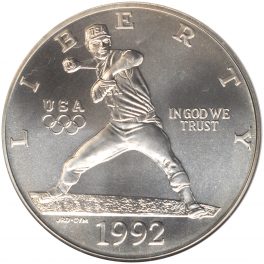 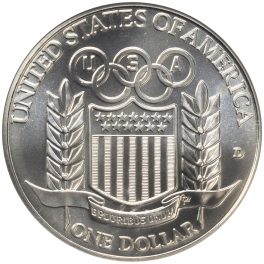 In 1992, the first Olympic baseball game was played, and eventually won by the Cuban National team. This coin commemorates that event, and the Olympics that were played in Spain in the year of 1992. The front features and image of a pitcher and the reverse shows a crest. The coin was designed by James Sharpe, James Pede, and James Ferrell. The 1992 $1 Olympic Baseball Commemorative Coin was produced in both regular and proof strikes. This coin was minted at the Denver Mint.
Obverse: Liberty – 1992 – In God We Trust – USA | Reverse: United States of America – One Dollar – USA – E Pluribus Unum