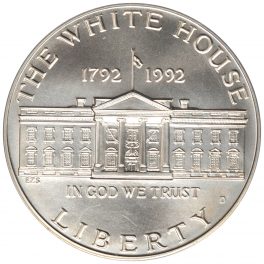 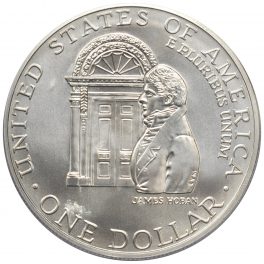 The 1992 $1 Silver White House Commemorative Coin features a design by Edgar Steever and Chester Martin on the obverse and reverse. The obverse shows the White House, while the reverse shows James Hoban in front of a door. This coin was struck to commemorate the 200th anniversary of the White House. Regular issue price of this coin was $32 at the time of release. This coin was minted at the Denver Mint.
Obverse: The White House – Liberty – 1792 1992 – In God We Trust | Reverse: United States of America – E Pluribus Unum – One Dollar