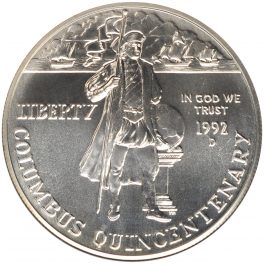 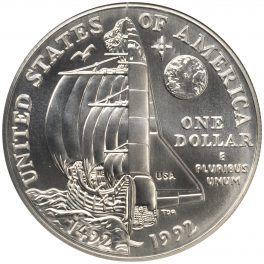 The 1992 $1 Silver Columbus Commemorative Coin was designed by James Ferrell and Thomas Rogers. In 1492, Columbus landed in the Americas and marked the founding of our current civilization. This coin stands to commemorate the 500th anniversary of the landing by showing Columbus on the obverse, and half of a boat and half of a spacecraft on the reverse. This is meant to show the comparison of where the country originated and where it is now with its technological advances. The coin sold for $28 at issue and was well struck in both proof and regular issues. This coin was minted at the Denver Mint.
Obverse: In God We Trust – 1992 – Columbus Quincentennary – Liberty | Reverse: United States of America – One Dollar – E Pluribus Unum – 1492 1992