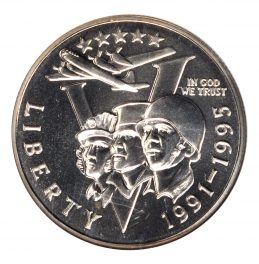 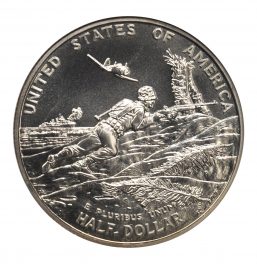 The 1991-1995 $0.50 Clad World War II Commemorative Coin was produced to commemorate the 50th anniversary of the beginning of the United States involvement in World War II and the end of the war. The obverse shows soldiers with a plane flying above. The reverse shows a soldier crawling on the ground in the heat of battle. This coin was minted at the Philadelphia Mint.
Obverse: Liberty – 1991-1995 – In God We Trust | Reverse: United States of America – Half Dollar – E Pluribus Unum