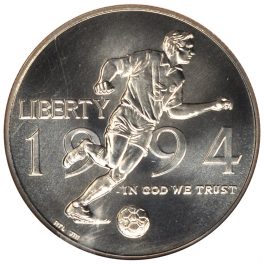 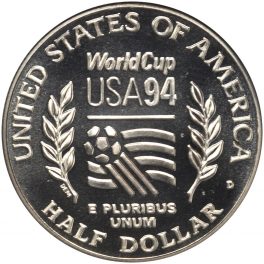 The 1994 $0.50 Clad World Cup Commemorative Coin was created to commemorate the first ever playing of the World Cup in the United States of America. The front shows a soccer player and the reverse shows the logo of the event with two fern leaves to either side. This coin was minted at the Denver Mint.
Obverse: Liberty – 1994 – In God We Trust | Reverse: United States of America – World Cup USA 94 – E Pluribus Unum – Half Dollar