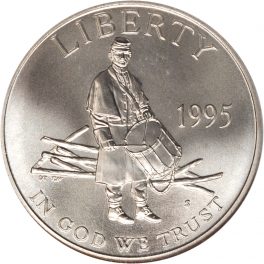 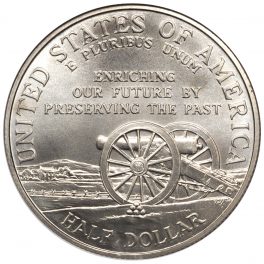 The 1995 $0.50 Clad Civil War Commemorative Coin was used as a fund raiser coin for the preservation of America’s historical sites, in particular, the battlefields of the Civil War. The front shows an image of a drummer boy in his army attire. The reverse has an image of a cannon. You can own this coin in the clad variety or in a gold variety, however they are different denominations. This coin was minted at the San Francisco Mint.
Obverse: Liberty – 1995 – In God We Trust | Reverse: United States of America – Half Dollar – E Pluribus Unum – Enriching Our Future, By Preserving the Past