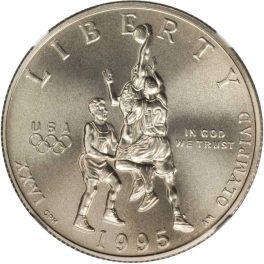 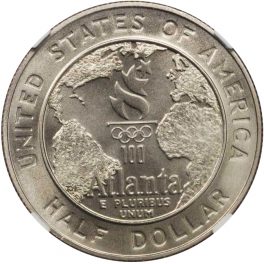 The 1995 $0.50 Clad Olympic Basketball Commemorative Coin depicts an image of three basketball players on the obverse. The coin was designed by Clint Hansen and James Ferrell. The reverse has a torch placed over a background image of a globe. This coin was part of the Olympic series. This coin was minted at the San Francisco Mint.
Obverse: Liberty – 1995 – In God We Trust – XXVI Olympiad – USA | Reverse: United States of America – Half Dollar – 100 – Atlanta – E Pluribus Unum