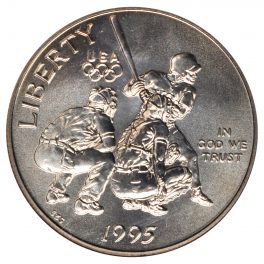 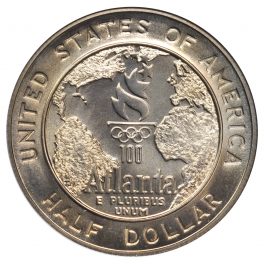 The 1995 $0.50 Clad Olympic Baseball Commemorative Coin shows on the obverse, a batter, catcher, and umpire. The reverse depicts the same torch and globe as the previous basketball issue coin. Some of the half dollar series were made in silver, however this coin is simply copper and nickel. This coin was minted at the San Francisco Mint.
Obverse: Liberty – USA – In God We Trust – 1995 | Reverse: United States of America – Half Dollar – 100 – Atlanta – E Pluribus Unum