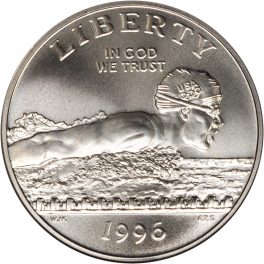 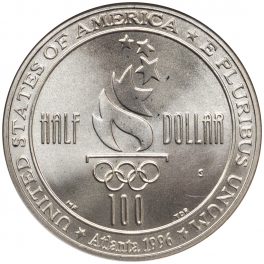 The 1996 $0.50 Clad Olympic Swimming Commemorative Coin shows a swimmer competing on the obverse. The reverse of the coin shows the Olympic torch with the logo and “100” incorperated into the design. This coin was design by William Krawczewics and Malcom Farley. This coin was minted at the San Francisco Mint.
Obverse: Liberty – In God We Trust 0 1996 | Reverse: United States of America – Half Dollar – 100 – Atlanta – E Pluribus Unum