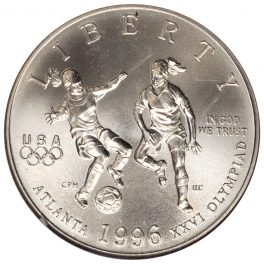 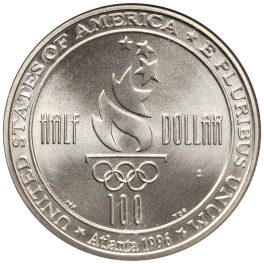 The 1996 $0.50 Clad Soccer Commemorative Coin depicts two women engaging in the sport of soccer. This commemorates the playing of soccer in the 196 Olympic games that were held in Atlanta, Georgia. These coins, like many other half dollar commemoratives are popular on today’s market and should be easy to find in most grades. This coin was minted at the San Francisco Mint.
Obverse: Liberty – 1996 – In God We Trust – XXVI Olympiad – USA | Reverse: United States of America – E Pluribus Unum – Atlanta 1996 – 100 – Half Dollar