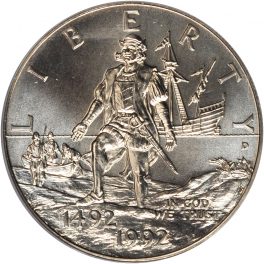 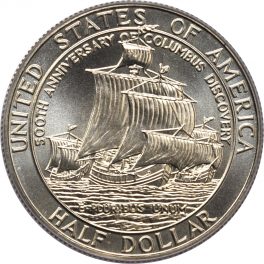 The 1992 $0.50 Clad Columbus Commemorative Coin shows a strong and powerful Columbus standing on the obverse of the coin. Columbus can be seen with a boat in the background as he makes his way onto dry land. The reverse of the coin also shows the three ships that were in the background previously. This coin was minted at the Denver Mint.
Obverse: Liberty – 1492 – 1992 – In God We Trust | Reverse: United States of America – 500th Anniversary of Columbus Discovery – Half Dollar – E Pluribus Unum