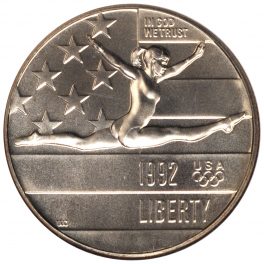 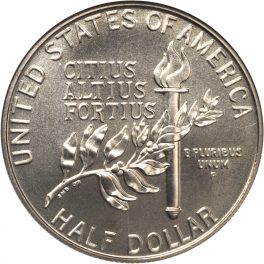 The 1992 $0.50 Clad Olympic Gymnast Commemorative Coin shows a female on the obverse participating in the sport of Gymnastics at the 1992 Olympic Games. On the reverse we see the Olympic Torch as well as some flowers. The coin sports the Olympic Logo as well. This coin was minted at the Philadelphia Mint.
Obverse: In God We Trust – 1992 – Liberty – USA | Reverse: United States of America – Half Dollar – Citius Altius Fortius – E Pluribus Unum