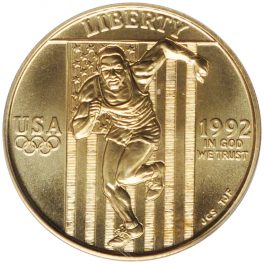 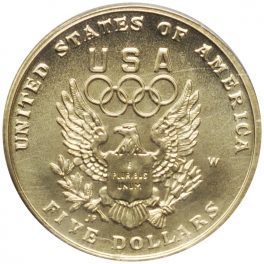 The 1992 $5 Gold Olympic Running Commemorative Coin is part of a series of clad and silver coins that were produced for the 1992 Olympic games. The coin shows a runner on the obverse and an eagle with the Olympic rings on the reverse. This coin was minted at the West Point Mint.
Obverse: Liberty – 1992 In God We Trust – USA | Reverse: United States of America – USA – Five Dollars – E Pluribus Unum