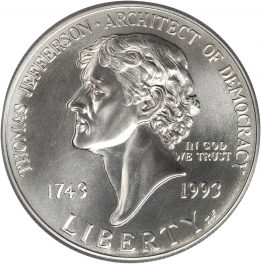 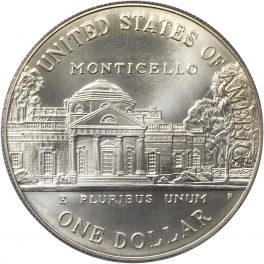 The 1993 $1 Silver Jefferson Commemorative Coin features a portrait of Thomas Jefferson on the front and his home at Monticello on the reverse. The coin was designed by James Ferrell and commemorates the 250th Birth Anniversary of Thomas Jefferson. The issue price of this coin was $32. This coin was minted at the Philadelphia Mint.
Obverse: Thomas Jefferson Architect of Democracy – Liberty – 1743 1993 – In God We Trust | Reverse: United States of America – E Pluribus Unum – Monticello