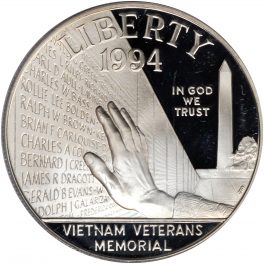 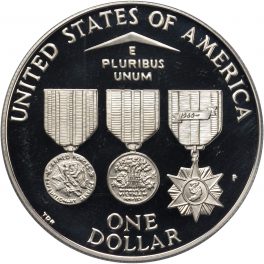 The 1994 $1 Silver Vietnam Commemorative Coin commemorates the 10th anniversary of the Vietnam War Memorial Wall. The wall is located in Washington D.C. and was built to remember all of the soldiers that died in the war. The coin was designed by John Mercanti and Thomas Rogers. The front shows the wall with a hand touching the wall, while the obverse shows three medals aligned. The maximum mintage amount was 500,000 however, only 53,317 were actually produced. This coin was minted at the West Point.
Obverse: Liberty – 1994 – In God We Trust – Vietnam Veterans Memorial | Reverse: United States of America – One Dollar – E Pluribus Unum