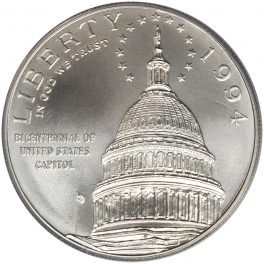 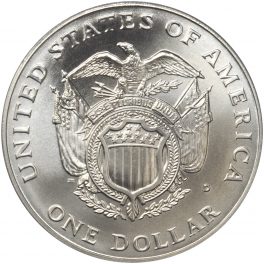 The 1994 $1 Silver Capitol Commemorative Coin commemorates the 200th anniversary of the Unite States Capitol building being built. The front side shows the Capitol Building with thirteen stars above, likely symbolizing the thirteen original colonies. The reverse shows a crest and has the stars as well. This coins initial offer price was slightly higher, priced at $37. This may be because the mint anticipated the coin to be a high seller, or the price of silver may have seen fluctuation. This coin was minted at the Denver Mint.
Obverse: Liberty – 1994 – In God We Trust – Bicentennial of United States Capitol | Reverse: United States of America – One Dollar – E Pluribus Unum