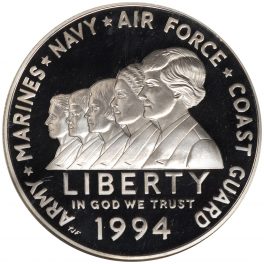 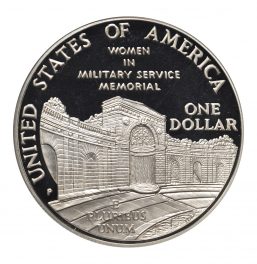 The 1994 $1 Silver Women Military Commemorative Coin shows five women in a line on the obverse. These women represent each of the branches of the military. The reverse of the coin is the Women in Military Service Memorial building. This coin was designed by James Ferrell and Thomas Rogers. This memorial is located at the front entrance to Arlington National Cemetery, where fallen soldiers are buried. The original issue price for this coin was $32. This coin was minted at the West Point Mint.
Obverse: Liberty – In God We Trust – 1994 – Army Marines Navy Air Force Coast Guard | Reverse: United States of America – One Dollar – E Pluribus Unum – Women in Military Service Memorial