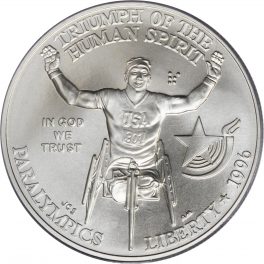 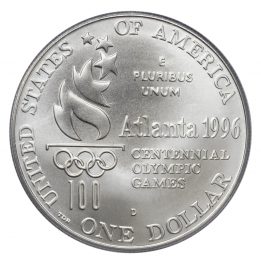 The 1995 $1 Silver Paralympic Commemorative Coin was minted to commemorate the Olympic games held in Atlanta, Georgia in 1996. This coin can be found in most grades above MS67, however, MS70 is much less common. The world record for this coin was sold by Stacks Bowers at the price of $800. The original price was $32, which is an average price for most commemorative coins. This coin was minted at the Denver Mint.
Obverse: Triumph of the Human Spirit Paralympics – Liberty – 1995 – In God We Trust | Reverse: United States of America – One Dollar – E Pluribus Unum – 100 Atlanta