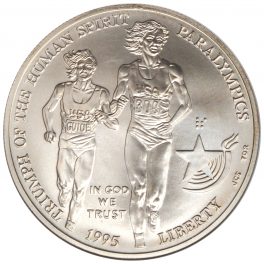 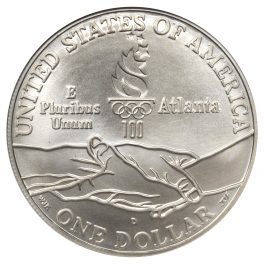 Information and History of $1 1995 Track and Field Silver Coin

The 1995 $1 Silver Track and Field Commemorative Coin shows two runner crossing the finish line on the obverse, and two hands grasping one another on the reverse. This coin was produced by John Mercanti and William Krawczewics for the 1996 Atlanta, Georgia Olympic Games. There were two different mint marks offered on this coin. A MS70 can fetch far more than a MS69, but these coins still seem to be very common on today’s market. This coin was minted at the Denver Mint.
Obverse: USA – 2 3 4 5 – In God We Trust – 1995 – Liberty – XXVI Olympiad | Reverse: United States of America – One Dollar – E Pluribus Unum – 100 Atlanta