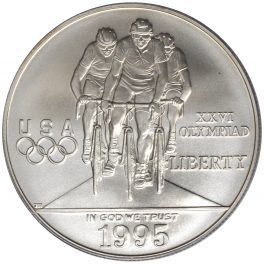 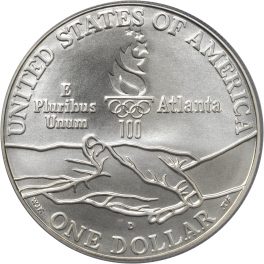 The 1995 $1 Silver Cycling Commemorative Coin shows three cyclist on the obverse and the two hands grasping one another on the reverse. The Olympic torch is above the hands with “100” written above. The 100 symbolized the 100th Anniversary of the modern Olympic games being played. This particular Olympics took place in Atlanta, Georgia in 1996, even though the date on the coin is 1995. The coins design was created by John Mercanti and William Krawczewics. Although they are not as common in MS70, they are still available for the collector who seeks one. This coin was minted at the Denver Mint.
Obverse: XXVI Olympiad – Liberty – 1995 – In God We Trust – USA | Reverse: United States of America – One Dollar – E Pluribus Unum – 100 Atlanta