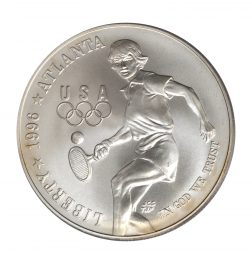 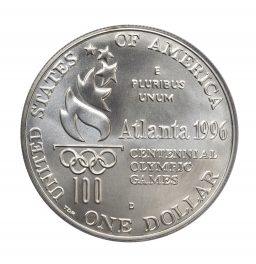 The 1996 $1 Silver Tennis Commemorative Coin shows a tennis player on the obverse and the torch, Olympic rings, and a “100” on the reverse. This was the 100th Anniversary of the modern Olympic games, and it was played in Atlanta, Georgia. The design was created by James Sharpe and Thomas Rogers. There were a total of sixteen coins struck to commemorate the XXVI Olympiad held in Atlanta, GA. However, not all 16 coins were in the same denomination or made from the same metal. The coin cost $32 at the original offering. This coin was minted at the Denver Mint.
Obverse: In God We Trust – Liberty – 1996 – Atlanta – USA | Reverse: United States of America – One Dollar – E Pluribus Unum – Atlanta 1996 – Centennial Olympic Games – 100