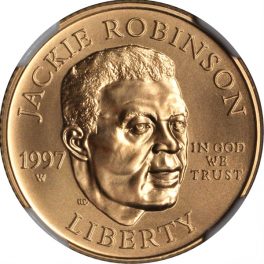 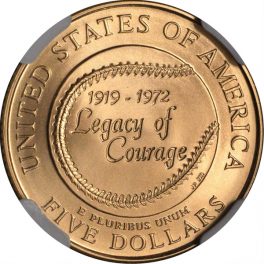 The 1997 $5 Gold Jackie Robinson Commemorative Coin commemorates one of the legendary figures in the world of baseball. This coin is sought after because of its history and the pride of knowing what it stands for. Jackie Robinson entered the world of baseball and turning it on its head. He became Rookie of the Year and later won the MVP for the leage. He was known for being the first major African American baseball player. This coin shows his portrait and a baseball on the reverse. This coin was minted at the West Point Mint.
Obverse: Jackie Robinson – In God We Trust – Liberty – 1997 | Reverse: United States of America – Five Dollars – 1919-1972 Legacy of Courage – E Pluribus Unum