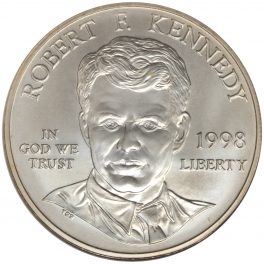 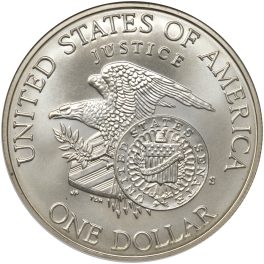 The 1998 $1 Silver RFK Commemorative Coin was made to commemorate the 30th anniversary of Robert Kennedy’s death. The coin was designed by Thomas Rogers and there were over 100,000 regular strikes produced. This coin was originally issued for $32 each. The obverse of the coin has a portrait of Robert Kennedy, and the reverse has an eagle mounted on a shield. This coin was minted at the San Francisco Mint.
Obverse: Robert F. Kennedy – 1998 – Liberty – In God We Trust | Reverse: United States of America – One Dollar – Justice