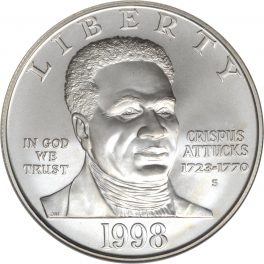 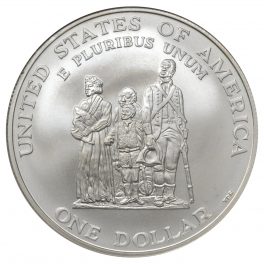 The 1998 $1 Silver Crispus Attucks Commemorative Coin commemorates the birth of Crispus Attucks. Attucks was an African American man who became the first Black casualty of the American Revolution. He was shot, and killed, during the Boston Massacre. The coin was designed by John Mercanti and Ed Dwight and was produced in a small run of just over 37,000. The obverse of the coin shows a portrait of Attucksm, while the reverse shows an African American family. The original selling price of this coin was $32. This coin was minted at the San Francisco Mint.
Obverse: Liberty – Crispus Attucks 1723-1770 – 1998 – In God We Trust | Reverse: United States of America – One Dollar – E Pluribus Unum