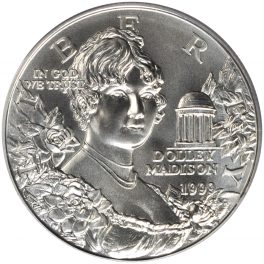 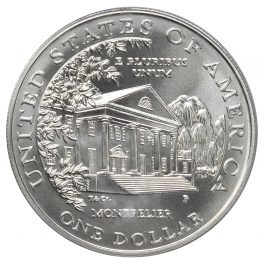 The 1999 $1 Silver Dolley Madison Commemorative Coin is beautifully designed with its portrait on the obverse and the family home on the reverse. We see the image of Dolly Madison on the obverse, in what appears to be a very well thought out composition. On the reverse, as mentioned before, is Montpelier surrounded by trees and bushes. The detail in this coin is extravagant. It was designed by James Ferrell and Thomas Rogers. This coin because the first of its kind…that is, the first coin to feature a first woman. Make sure you get a high grade example of this coin so that you can appreciate all of its detail. This coin was minted at the Philadelphia Mint.
Obverse: Liberty – Dolly Madison – 1999 – In God We Trust | Reverse: United States of America – One Dollar – E Pluribus Unum – Montpelier