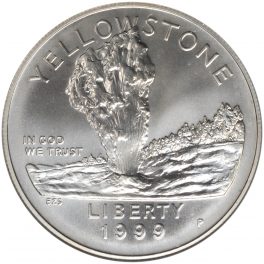 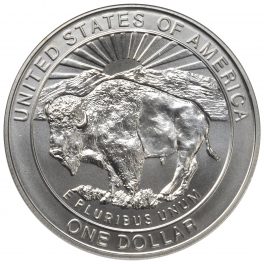 The 1999 $1 Silver Yellowstone Commemorative Coin shows off the impressive Old Faithful on the obverse. The reverse shows another popular staple of Yellowstone National Park, the American bison. The coins design came from Edgar Steever and William Cousins. The two designers are known for their work with several other commemorative coins during this time period. This coin commemorates the 125th anniversary of the United States of America’s first National Park. Over the years, this park has provided beauty and wonder to everyone who passes through, so it is only fitting that the commemorative coin provides the same feeling. This coin was originally sold for $32 each. This coin was minted at the Philadelphia Mint.
Obverse: Yellowstone – Liberty – 1999 – In God We Trust | Reverse: United States of America – One Dollar – E Pluribus Unum