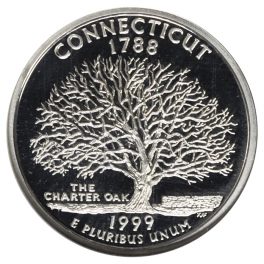 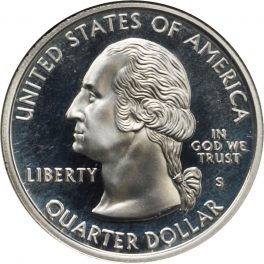 The obverse of the 1999 Connecticut State Quarter shows the standard Washington Quarter design with a few alterations. The Washington Quarter, that ran from 1932-1998, had the date on the obverse, as well as the word “Liberty.” This design was changed slightly with the introduction of the State Quarters, and later the Territory Quarters and National Park Quarters. The new design still shows Washington looking left, however the obverse text now reads “United States of America – Liberty – In God We Trust – Quarter Dollar.” The reverse of this coin depicts a large Oak tree whose branches fill almost the entire coin. The White Oak shown on the coin was the famous hiding place of the Connecticut Charter. Locals were hiding the Charter from British authorities in 1687. According to stories, the Charter hid in a hallow part of the tree as the British were trying to confiscate the Charter. The tree stood up until 1856, when it fell over in a storm. As the story goes in its entirety, on October 31, 1687, a representative from Great Britain was sent by King James II to challenge the charter of Connecticut. The representative demanded that the resident of Connecticut surrender the charter. This drama unfolded while representatives of each party (the British Representative and the ruling class of Connecticut) sat across the table from each other. In the middle of the heated discussions, the lights went out in the building, and when lighting was restored, the charter had been taken off of the table by Captain Joseph Wadsworth. He went to the nearest white oak tree and concealed the charter in its trunk until 1856 when the tree fell. The tree was measured one year before it fell and it measured 28 feet across at the base, 70 feet tall, and each branch was nearly 40 feet in length. This tree became even more famous when Charles Brownell painted an image of the tree that was later used on the 1935 Connecticut Tercentenary commemorative half dollar. Several people have come forward to protest the way that the tree was shown. The quarter shows the tree as a large, neatly pruned dome full of life. However, according to accounts, the tree was gnarly and not all that attractive. The coin design was decided on by a competition hosted by Governor John G. Rowland. Rowland set up the Connecticut Coin Design Competition. Entries from this competition numbered in the 100s, and 19 of the designs featured the Charter Oak. This was the 5th coin released in the Statehood Quarters program. The reverse text of the coin reads “Connecticut 1788 – The Charter Oak – 1999 – E Pluribus Unum.” All of the Statehood Quarters were clad, meaning that they were seventy-five to eighty percent copper, and the rest was composed of nickel. The core of the coins were solid copper. These coins, however, were produced in silver for special Silver Proof Sets. The coins minted in included Delaware, Pennsylvania, New Jersey, Georgia, and Connecticut.
Errors on the 1999 Connecticut State Quarter There are currently no known errors of this coin. If you ever run across anything that looks unusual with the Connecticut State Quarter, please contact one of our experts to have the error verified, or send the coin to a professional grading company for their opinion. However, the average circulation State Quarter is only worth the face value of $0.25. These coins can be spent, saved, or taken to the bank.
Varieties on the 1999 Connecticut State Quarter This coin, designed by John Flanagan and James Ferrell was produced in a silver variety as part of proof sets. There were a total of 804,565 silver coins produced for this series. They are composed of 90% silver and 10% copper. The average price of the single silver coin ranges from $5 to $10, depending on the grade. The easy indicator to determine if your coin is silver is by the mint mark. The silver quarters will have an “S” mintmark, rather than a “P” or “D.” In addition to the silver quarters, late-night TV. began selling gold plated State Quarters in an attempt to con viewers into thinking that the coin would be worth a lot more. Unfortunately, the amount of gold that it takes to plate a quarter is very insignificant, and these gold plated quarters have no value in the collector community.