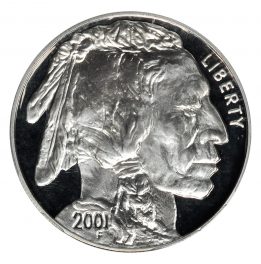 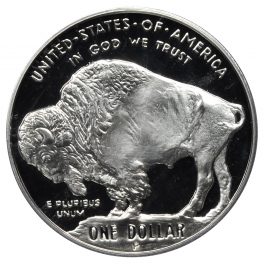 The 2001 $1 Silver Buffalo Commemorative Coin resembles the Buffalo Nickel design that was so popular during the early 1900s. The design was created by James Earl Fraiser. Since this was such a popular design, the United States Mint quickly sold out of this coin within a few weeks of release. The Mint released the coin for $54 each, and they would sell online the same day for $300-500. This coin is extremely popular, and, unlike other silver commemoratives, you should expect to be able to get more for it than the initial purchase price. This coin was minted at the Denver Mint.
Obverse: Liberty – 2001 | Reverse: United States of America – In God We Trust – One Dollar – E Pluribus Unum