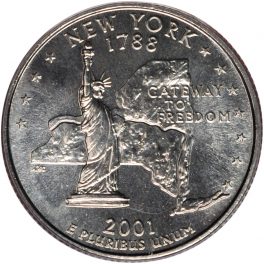 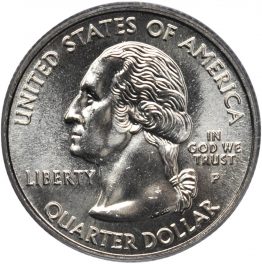 The obverse of the 2001 New York State Quarter shows the standard Washington Quarter design with a few alterations. The Washington Quarter, that ran from 1932-1998, had the date on the obverse, as well as the word “Liberty.” This design was changed slightly with the introduction of the State Quarters, and later the Territory Quarters and National Park Quarters. The new design still shows Washington looking left, however the obverse text now reads “United States of America – Liberty – In God We Trust – Quarter Dollar.” The reverse of this coin depicts the famous Statue of Liberty, which was given to the United States as a gift from France for winning out Independence from Great Britain. The coin also shows the Erie Canal and has 11 stars to represent each of the states in the Union when New York joined. The coin has the phrase “Gateway to Freedom” because New York City has always been a point of entry into the United States. Ellis Island was the place where entering immigrants would come before being allowed into the states. The coin was not well received, though, because the idea of the Statue of Liberty had been overused at this point. Just like previous state’s designs, the Governor of New York took submissions for the ideas. The final submission ideas were the Statue of Liberty, the Half Moon ship of Henry Hudson, the Battle of Saratoga (which was later depicted on its own quarter), and buildings in New York City with historical significance. The Mint chose to go with the design of Liberty for a few reasons. Hudson had been represented in several ways on medals and commemorative coins in the past. The Battle of Saratoga was a topic that would not be familiar with residents, although it did happen in the state of New York. The Battle was also shown on the reverse of the rare $500 National Banknote from 1875. The buildings in New York City were declined because it was too generic of an idea. So, at last, the Mint adopted Lady Liberty once again. This was the 11th coin released in the Statehood Quarters program. The reverse text of the coin reads “New York 1788 – Gateway to Freedom – 2001 – E Pluribus Unum.” All of the Statehood Quarters were clad, meaning that they were seventy-five to eighty percent copper, and the rest was composed of nickel. The core of the coins were solid copper. These coins, however, were produced in silver for special Silver Proof Sets. The coins minted in included New York, North Carolina, Rhode Island, Vermont, and Kentucky.
Errors on the 2001 New York State Quarter There are currently no known errors of this coin. If you ever run across anything that looks unusual with the New York State Quarter, please contact one of our experts to have the error verified, or send the coin to a professional grading company for their opinion. However, the average circulation State Quarter is only worth the face value of $0.25. These coins can be spent, saved, or taken to the bank.
Varieties on the 2001 New York State Quarter This coin, designed by John Flanagan and Alfred Maletsky was produced in a silver variety as part of proof sets. There were a total of 889,694 silver coins produced for this series. They are composed of 90% silver and 10% copper. The average price of the single silver coin ranges from $5 to $10, depending on the grade. The easy indicator to determine if your coin is silver is by the mint mark. The silver quarters will have an “S” mintmark, rather than a “P” or “D.” In addition to the silver quarters, late-night TV. began selling gold plated State Quarters in an attempt to con viewers into thinking that the coin would be worth a lot more. Unfortunately, the amount of gold that it takes to plate a quarter is very insignificant, and these gold plated quarters have no value in the collector community.