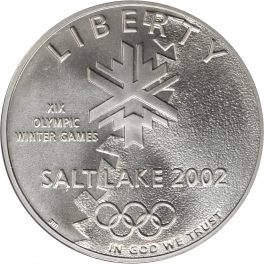 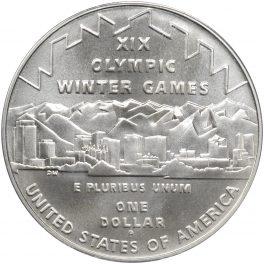 The 2002 $1 Silver Olympic Commemorative Coin was issued to commemorate the 2002 Olympics that took place in Salt Lake City for the winter sports. The obverse of the coin shows the Olympic logo and that years Olympic crest. The reverse of the coin shows downtown Salt Lake City with the Rocky Mountains in the background. The coins were sold at release for $32 each. This coin was minted at the Philadelphia Mint.
Obverse: Liberty – In God We Trust – Salt Lake 2002 – XIX Olympic Winter Games | Reverse: XIX Olympic Winter Games – E Pluribus Unum – One Dollar – United States of America