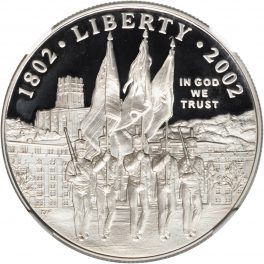 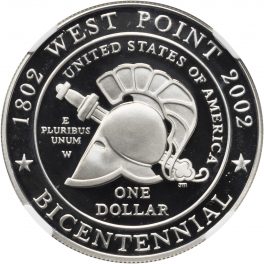 The 2002 $1 Silver West Point Commemorative Coin commemorates the founding of West Point in 1802. The West Point Military was signed into law President Thomas Jefferson. The front of the coin shows five cadets marching with flags and the University in the background. The reverse shows a helmet and with a sword in the background. These coins sold for $32 each. This coin was minted at the West Point Mint.
Obverse: 1802 – Liberty – 2002 – In God We Trust | Reverse: 1802 West Point 2002 – Bicentennial – One Dollar – E Pluribus Unum – United States of America